Spoiler:
Yve: With me is Max Scharl from redspotgames, hello Max!

Y: You develop games for Dreamcast, a console that's been dead for nine years now... sounds a bit strange, so why are you doing that?

M: We are a publisher, distributor and promoter for new Sega Dreamcast games, we're also developing in-house, but it's mainly gonna be external assignments. As for why we're doing what we're doing... Well, about five years ago, five friends thought, Dreamcast is an amazing console and we couldn't understand why it was discontinued, it was really abandoned by the industry just like that, just because of some internal company issues. So that's why we thought this can't be it and we want to keep on providing the console with games, that's our motto. The platform can never be too old or too unknown for us to develop new games for it.

Y: So you're big Dreamcast fans and thought "The dream has to go on".

Y: So you're some kind of "Underdog"?

M: Well, like we've just then in the report (There was a reportage about underdogs like Apple before the segment) about Apple, right now Apple is a giant company, which became big thanks to it underdog status and also advertises like that. We are still small. And I don't think we can advertise with that, nor do we want to, because it's so obvious. After all, we're just addressing the people already inside the scene, surely a few more, but all in all, we're not relying on the underdog status.

Y: So you're still real underdogs! Well, does it pay off, I mean you have to live of it, right?

M: You "should" be able to live of it, you're right there. Well, I have to admit, it's a close thing. With good promotion, you can already get the sales of an average WiiWare or XBox Live Arcade game, but in the end it's still a console with a lot of loyal fans, yet no big publisher would ever consider publishing for it, because you can't keep a company going like that. For us, it's difficult as well, but we're only a small amount of people, we have a good overview, so it's okay for us.

Y: And you also put a lot of effort in your new game, a new topgame which you also have with you today.

M: Right, we have been working for six years now on a game called "Sturmwind" (Stormwind) you can see here in the background. It has been developed by a two-man-team from Baden-Württemberg (German region) called "Duranik", and right now, we've shown this game to the public for the first time ever, and with this show, this report, the preordering starts, which can be reached at www.redspotgames.com/shop where you can take a first glance and buy the game.

Y: Making a bit of advertisement here, t hat's not too bad, is it? *laughs*

M: Yeah right, it's the time before christmas, and a long-time gaming fan could think of getting a classic game. Like you see, it's pretty old-school and follows the old principles. I would even go as far as to say that it uses pretty unique effects and animations for an Indie Dreamcast release.

M: Yes, it became that recently and we're happy about that, we started back before retro was a trend. I think it's just a fixed thing in history, that retro, the old stuff, now especially with the "flooding of the modern wold", is getting more and more interesting.

Y: Max, thanks for being here and I wish you good luck with your new game and all your other projects. 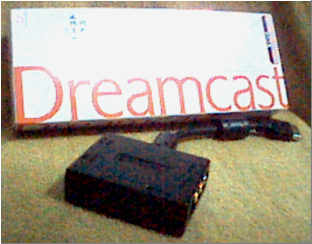